Game of the Week: Alex Kidd!

When I first got my Sega Megadrive back in the early 90’s we only had two games to play. The first one was the bundled Sonic the Hedgehog game and the second was Alex Kidd.

I remember playing this on the Master System before so the character was familiar me. The difference between the Master system version and Megadrive meant we could see Alex Kidd in all the 16-bit glory that was allowed at the time.

The game starts of as ever in a simple town which allows you to quickly get used to the games mechanics. You soon realise on your first play through that if you touch an enemy then you’re dead – simple.

In this first area the second game play mechanic is brought into action, the chance to win in-game items that will help you on your journey. All you have to do is win a game of Rock, Paper & Scissors. The price to play this game is either money (which you pick up from destroying your enemies) or your life. If you win then you get the item that was on offer, if not then it can be quite a unfortunate mistake.

There are some great items that can help you through the game such as a Ring which allows you to fire projectiles at your enemies. This is most useful as it allows you to stay quite a distance away from your enemies and yet still take them out. One of the other useful items you can get are the vehicles. The motorbike allows you to quickly traverse the levels and take enemies out, the fun usually stops quite quick when you crash into an immovable object and thus means you lose it.

The next best item I found in the game was the helicopter. This device allowed you to quickly traverse the levels high above the enemies fire line and make good progress. It did however mean you had to Mash the “C button” to get afloat. When I invested in a turbo pad this helped massively to help keeping afloat whilst you’re firing missiles. 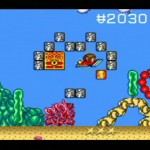 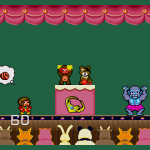 As you progress through the game you go through forest, egyptian and even a Sky Castle levels. For a 5 year old to play at the time it did take me quite a while to finish this game, but nonetheless it is still one I like to come back and have a play on periodically.
Share